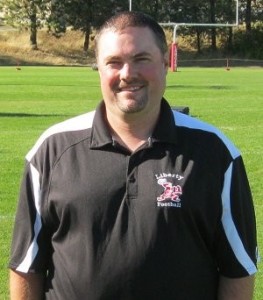 Kyle Kimble has been an Ag. Teacher, FFA Advisor, Coach since 1999.  Mr. Kimble started his teaching career at Mt. Baker High School in Deming, WA where he taught Horticulture, Advanced Horticulture, and Agriscience.  While at Mt. Baker, he was also an assistant football coach and volunteer baseball coach.

A school levy failure at Mt. Baker forced him to move to John Day, OR, where he taught at Grant Union High School from 2000-2002.  Mr. Kimble was the first ag. instructor ever at GUHS and started the program in John Day.  During his time at Grant Union he taught Ag. Mechanics, Ag. Leadership, Ag. I, and Ag. II courses.  He also coached many state placing teams and the 2001 Oregon Creed Champion, and 2002 Oregon Marketing Plan Team.  Mr. Kimble was also a very active assistant coach for the High School Baseball and Football teams.

In 2002, Mr. Kimble and his wife decided to move a little closer to home in eastern Washington and took a job at Liberty High School in Spangle, WA.  Liberty has a strong agriculture and FFA tradition and has been a great home to the Kimble’s for the past 13 years.  During his time at Liberty he has taught, Ag. Science Technology, Ag. Leadership, Ag. Business, Horticulture, Ag. Mechanics, Metal Art, Computer Aided Drafting, and Robotics.  While at Liberty his FFA has won 5 state Ag. Issues Championships (2007, 2008, 2010, 2013, 2014)  and a Tractor Driving Championship (2013) as well as countless state placing teams in contests such as Marketing Plan, Parliamentary Procedure, Novice Parli Pro, Creed Speaking, Agronomy, Livestock Evaluation, and Meats Evaluation.  His program also competes in the FIRST Robotics Competition every year as well.  Mr. Kimble has a passion for coaching athletics, where he has been a head and assistant for the High School and Youth Baseball and Football programs at Liberty.

This summer, Mr. Kimble will be transitioning out of the classroom and onto the family farm in Pomeroy, WA.  He will continue to teach agriculture online and coach sports at Pomeroy High School.  Mr. Kimble is married to his wonderful wife Carrie and they have 3 boys, Tyson (12), Trevin (10), and Treyton (4).